From the start of our quick crop series until now, I made a promise. I promised you, the reader, that I would not write about lettuce. Today, I take another step, arriving dangerously close to that line. Dancing between salad greens is a thankless task, so today, we talk about spinach.

That’s right, the nutrient packed leafy green that gives popeye his punch and scares children across the country at the mere utterance of its name. Spinach is a versatile crop, especially suited for cooler climates and short scheduled dinner parties. It’s an excellent source of vitamins A & C, thiamin, potassium, and folic acid as well as beneficial carotenoids.

Spinach originated in Persia around 2000 BCE, the area that is modern day Iran. From there, it spread through Asia, nicknamed the Persian vegetable. The first written record of the crop was made in 647 CE, and it first made landfall in Europe via Sicily in the 9th century. Spinach grew quickly in popularity, coming to proliferate Mediterranean cultures throughout the 9th-12th centuries. By the 14th century, spinach had made its way to England, where it exploded in popularity due to its cool weather preference and spring planting ability. This is the point that spinach solidified its spot in the common western gardener’s seed catalog.

Spinach is a leafy green, scientifically classified as Spinacia oleracea. Much again to our amusement, spinach is a closer relative of beets and chard than it is a relative of lettuce. It is an annual plant, growing up to 1 foot in height. Leaves are a dark green with simple ovate to triangular shape. Generally, leaves will vary significantly in size, with larger leaves at the base and smaller up top. Flowers are small and yellow-green in color which eventually mature into small, hard, and dry seed clusters. 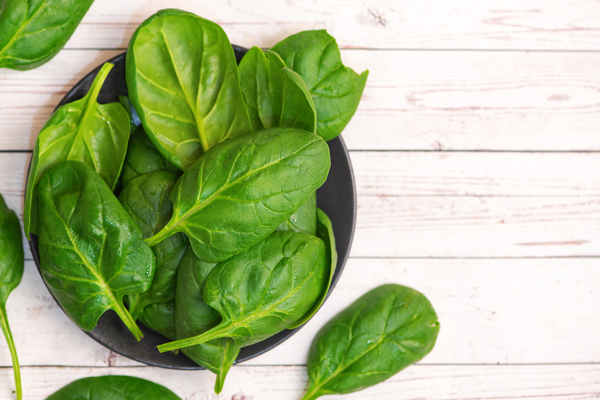 Three general categories of spinach exist, savory, semi-savory, and smooth leaf. Savory spinach can be identified by its crinkly and curly leaves, semi-savory by its slightly crinkled leaves, and smooth leaf by, well, the smoothness of the leaf. Although these are general categories, modern breeding has lead to a large spectrum of spinach’s genetic expressions, so these lines are set in sand, not stone.

As always, growing indoors affords gardeners the opportunity to move beyond plastic pots and containers and start a garden it an air-pruning or fabric container. After that, spinach prefers nitrogen heavy soil, so either picking a potting soil that comes pre-amended with fertilizer or top dressing with dry high-N fertilizer will help give your plants a boost in growth.

• Use a well draining soil with a pH of 6.0 or above
• Spinach loves nitrogen, so be sure to feed heavier on the N
• Worm castings, soy meal, and fish emulsions are excellent organic fertilizers to boost spinach productivity
• Sow seeds directly into final planting container, avoid soil above 70 degrees Fahrenheit
• If planting multiple in one container, thin them to about 6” apart after establishing growth
• Spinach prefers cooler weather, exposure to prolonged heat may cause bolting
• Plants prefer full sun or 24 hour light cycle.

Spinach does not produce one final fruit or root to harvest. Rather, we’re focused on growing large green leaves for consumption.

• Consistent production from your plant makes it easy to cut away old growth for consumption and keep new growth on the plant. This is a simple method to extend the life of your crop.
• Cut down Spinach plants to taste, you can test the flavor by simply picking and tasting a leaf.

Seeds
All of the seed companies listed below are sources I have personally used and had good customer experiences with. Take your pick of seed below! Remember, there are no wrong choices and no wrong time to start planting indoors.

Good Eatin’
Spinach usually does not take center stage in dishes, instead it is served on the side, consumed raw, or mixed into other greens. Below is a sampling of recipes with spinach included. From my experience, simple steamed, sauteed, or just spinach raw holds enough merit on its own.

Grow your garden strong to the finish, plant spinach. This is an excellent starting point for any indoor gardener, and an excellent turn around while we are still stuck at home. Spinach should be on the short list of garden greens for every indoor cultivator, and its easy growing capabilities and cool-weather tolerance will make it a staple of your planting for years to come.