Compost Teas… What are they? What do they do? You’ve probably heard the term being used before at the grow shop or among other growers, but you never really learned what this whole tea thing was about. Maybe all of this talk of “brewing” and “teas” for plants just sounds weird to you, but if you’re unfamiliar with this practice read on, or your yields could be missing out big time!

Brewing a compost tea is the process by which one extracts, multiplies, and grows nutrients, bacteria and fungi from natural sources. To do this, gardeners will often introduce bacteria/fungi into an aerated reservoir or bucket of water mixed with molasses. The Molasses becomes food and thus fuel for the bacteria to multiply, while the fungi begins to grow larger. The more bacteria present in your brew, and the larger the fungi grows, the greater your root mass and nutrient uptake will be. Bacteria works to assist with nutrient uptake, while the fungi develops upon, and in turn, grows your root mass. The bigger the roots, the bigger the fruits, and this is a great way to achieve root growth.

Using Teas is an amazing way to let your plants thrive and grow in a way similar to what occurs naturally in the environment. Mimicking Mother Nature is something growers have done for years, and brewing your own teas is a big part of that. Many growers like to use worm castings within their brews as well, but the term compost tea derives from using mature garden compost as the main ingredient. Garden compost is rich and diverse with tons of bacteria and fungi straight from your environment. Traditionally the gardener would introduce the compost in some kind of filter bag (still using the molasses as stated above), and introduce natural low strength food sources for your plant as well as microbes. More often than not, these various food sources include kelp (microbial food as well as a natural root growth stimulant), humic acid (utilized to naturally uptake micro nutrients while also adding more food for microbes to eat and break down), and fish protein (naturally occurring amino acids which are easily converted into available nitrogen for the plant). 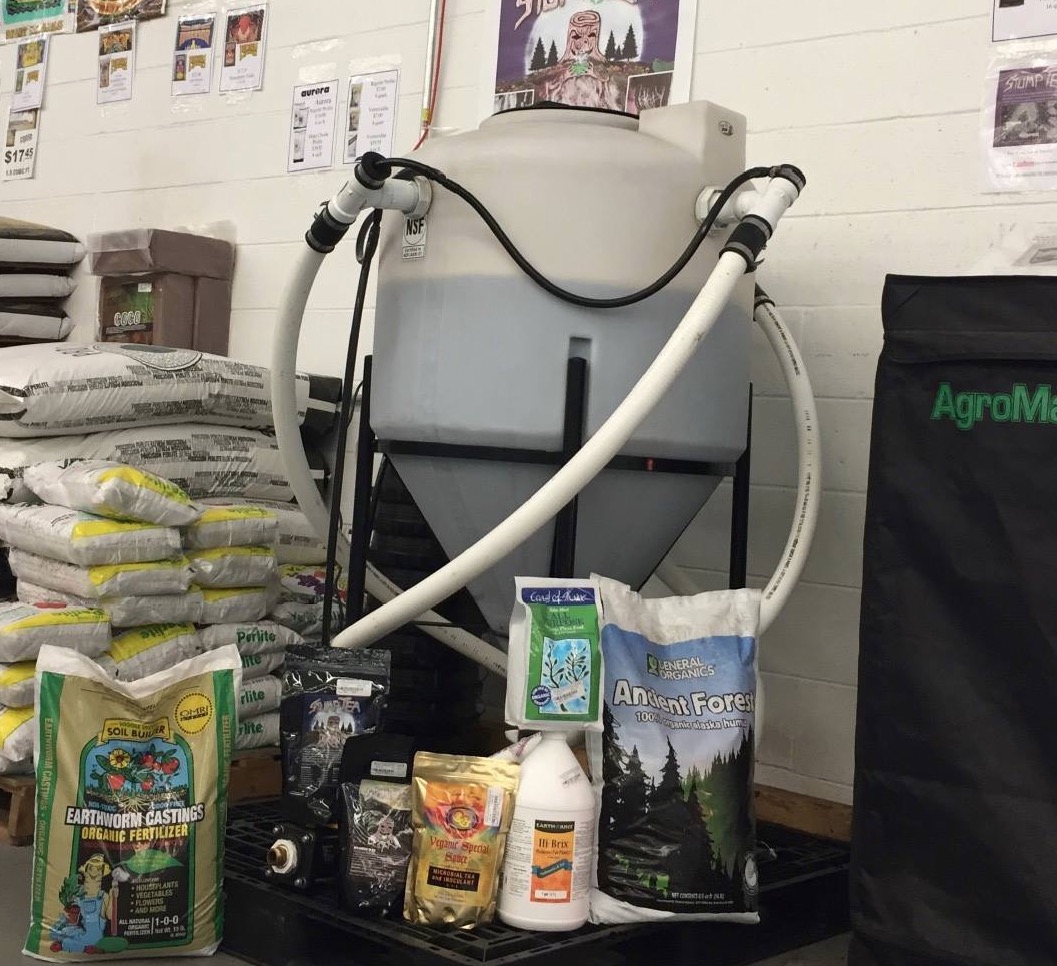 When you stop into HTG Supply, one thing you’ll notice right away is the variety of products we carry that are related to compost tea. Whether you want to start with brewing your own traditional compost teas or adding microbes that are ready to brew, we’ve got everything you need to get going today. Grab a bag of “Ancient Forest” or Bountea humisoil, and add a rich source of highly broken down, aged forest material, loaded with microbes for your brews. Try a bag of Detroit Worm Castings  with some Hi Brix Molasses by Earth Juice, and get a tea brewing with some Great White by Plant Success. Also be sure to check out our highly popular Stump Tea. Our premixed and ready to brew Stump Tea is loaded with bacteria and fungi, and is widely used by growers across the country.