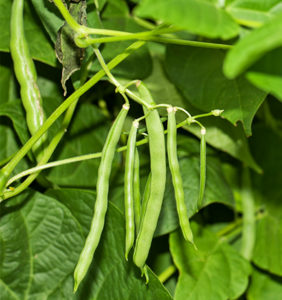 Beans, often regarded as a magical fruit, have had a place in our kitchens for decades. Baked, fried, mashed, on toast, it’s hard to have grown up and *not* eaten beans at some point. I remember my mother sneaking peas into applesauce on my plate. I also remember spitting out the texturally inconsistent pea/applesauce combo and the prompt soaping of my mouth as a consequence for spitting out food. At least that took away from the pea taste.

Regardless of my childhood exploits, I’ve grown to love beans as a plant. They’re nutritious, appealing in the garden, easy to grow, and fast producers. In general, beans break down into two groups, pole beans and bush beans. Pole beans, true to their name, require a structure, such as a pole, trellis, grid, or fence to climb. Bush beans, on the other stalk, are freestanding, stout varieties that require no additional support for their growth. 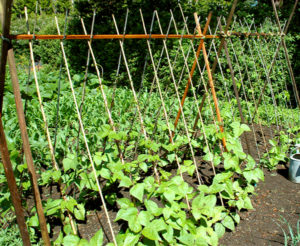 While pole beans have been a crop for millenia, bush beans are a more recent development. A result of selective breeding, bush beans are ideal for cultivation where vertical potential is limited and gardeners are looking for a quicker seed-to-harvest timeline. We’ll be focusing on bush beans in this article, as they produce quicker than their meristem in the clouds siblings.

Another line of demarcation among beans are the methods of consumption, specifically snap beans, shelling beans, and dry beans. Snap beans, otherwise known as string beans or green beans, are meant to be eaten right off the plant, pod included. Shelling beans are eaten fresh, but without the pod, just the beans themselves. Dry beans are consumed after the pods have completed growing and have since dried. Out of these, we’ll only be looking at bush varieties of shelling and snap beans, as these varieties will just squeeze into our quick crop 7-week window.

Ancient varieties of beans have been found in the Americas, Eurasia, & Africa, and the humble bean has been put to use in food production around the world. Beans are categorized as several genera of the Fabaceae family, a group of flowering plants. Generally used for human and animal food, beans are an agriculturally and economically significant crop. There are over 40,000 varieties of beans held throughout global genebanks, but only a small percentage of those are produced commercially for consumption. Most bean plants take more than seven weeks to produce, but some of the fastest bush varieties can turn around a crop pretty quickly.

Bush beans grow to full size in about six to seven weeks, then subsequently produce pods for about a month. Pods can show in a variety of colors, primarily green, purple, and yellow depending on the variety of bean. Bush beans also prefer warmer climates, with a soil temperature north of 65 degrees and full sun exposure. When planting bush beans indoors, be sure to give space for the plant to bush out. 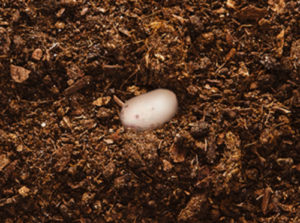 Planting and Growing
• Sow bush beans about 1 inch deep in soil.
• Plant beans in normally fertilized soil. Supplemental fertilizer may be added in light amounts because beans fix nitrogen from the air
• Aim for a soil pH of 6.0-6.8
• Beans are especially sensitive to transplanting, so consider starting them in their final container.
• Adding a bacterial inoculant, like Stump Tea or other bacteria-based fertilizers, will significantly aid your plants’ growth.
• Keep beans well watered, about two inches per week.
• Use containers between 3-5 gallons in size

Harvest
• Bush beans should be harvested when the pods are fully mature but still tender, between one and two weeks after flowering.
• Continue to pick pods off plants and the plants will keep producing.
• When picking, be delicate. Hold the branch you are picking from to prevent damaging the plant.
• Bean harvest can be stored in a cool, refrigerated area. Additionally, beans may be frozen post-harvest. Be sure to blanch lightly before freezing. 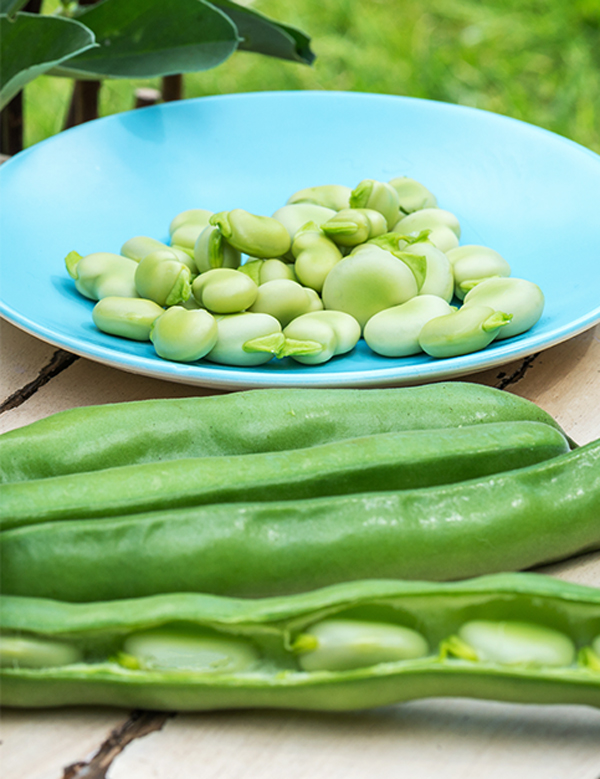 Seeds
All of the seed companies below are vendors that I have ordered from before! While most bush bean varieties take about 8 weeks to mature, there are a few that just slip into our quick-crop 7 day cutoff.

Good Eatin’
Snap and shelling beans usually don’t take center stage in dishes, but that doesn’t mean they don’t come packed with flavor. Below are a few selected recipes to make use of your bush beans after harvest.

That’s it for bush beans! Remember, if your mother told you to sell your cow at market and a strange old man stops you along the way offering beans, take them and dust off your climbing shoes. Also put on deodorant. Thank you for taking the time to review our bush bean guide! If you decide to toss your own beans in the dirt, let us know on social. You can find us on Facebook, Twitter, and Instagram, or if you’re social-shy shoot me an email at talkingshop@htgsupply.com!